Alexander Wang, synonymous with sports chic and its laid-back style.Defined by such a style the house has been credited with birthing the recent rise of ‘athlesiure’, wearing sports attire that wouldn’t quite work down the footy field. However, on Valentine’s Day, Wang’s A/W offering took a decidedly darker tone. The show held at Pier 36 had its usual glittering front row (Kimyae of course and baby North). The latter wearing a mini-me ensemble of the collection, leather jacket and studded dress. 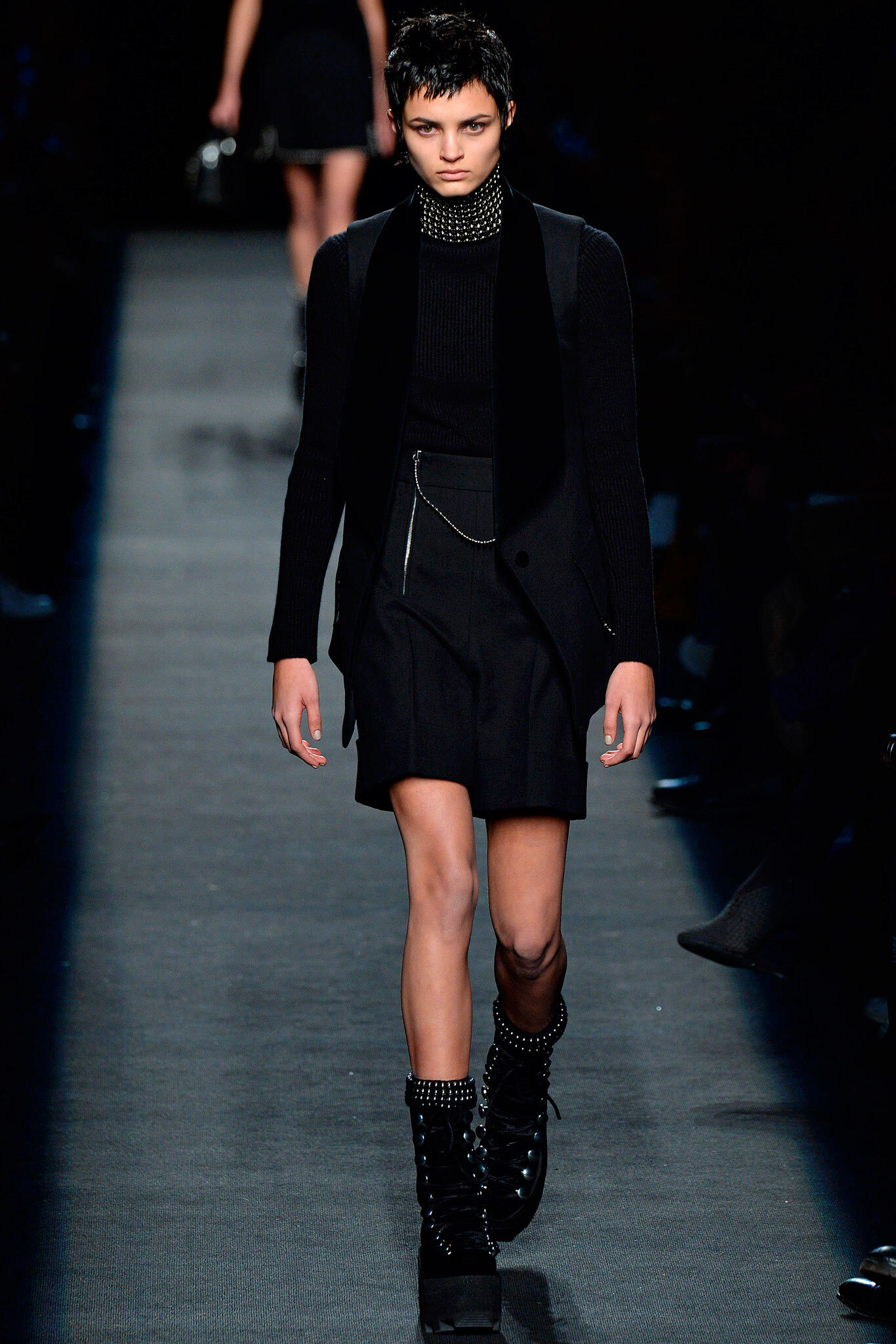 Heavy techno beats pounded from the speakers replacing the usual trap style of Wang’s shows. The first of the angry looking models stomped down the narrow catwalk, her scowl burning into my soul. Thick, meaty boots strapped to their skeletal ankles. The stuff of any teenage rebels dreams. Wang’s New York offering sacrificed the characteristic laid-back street vibe, for gothic-skater. Black dominated the tainted colour palate of the collection. Grungy hairstyles slicked across the face, razor sharp cheekbones and inverted suits punctuated with heavy studding. It’s clear that the house is wanting to shake off its former image, looking for an edgier, more punchier look. 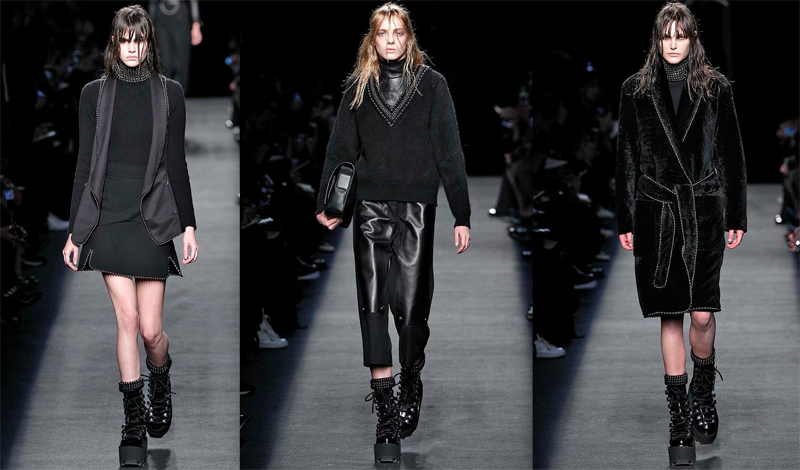 Leather roll necks, rich velvet suits and chain mail jumpers. The Wang women a symbol of rebellion, the underworld her new stomping ground. Although she has matured, her style has become more refined, more feminine. The demure of the Gothic heightened with a luxury spin of sophistication. The BDSM theme interwoven with chic, slick tailoring. Smoking jackets with a licking of leather lapels, crushed velour gowns adorned with sliver studs and high waisted cigarette pants, slit with zips and caressed by silver chains. The Wang rebel is not your White lightening guzzling goth at the swings. The Wang rebel is defined by her finesse and luxuriousness. The sheer chain mail dresses, synched in with jet corsetry and offset with the heavy buckled boots, tickling fashions fetish fancy. 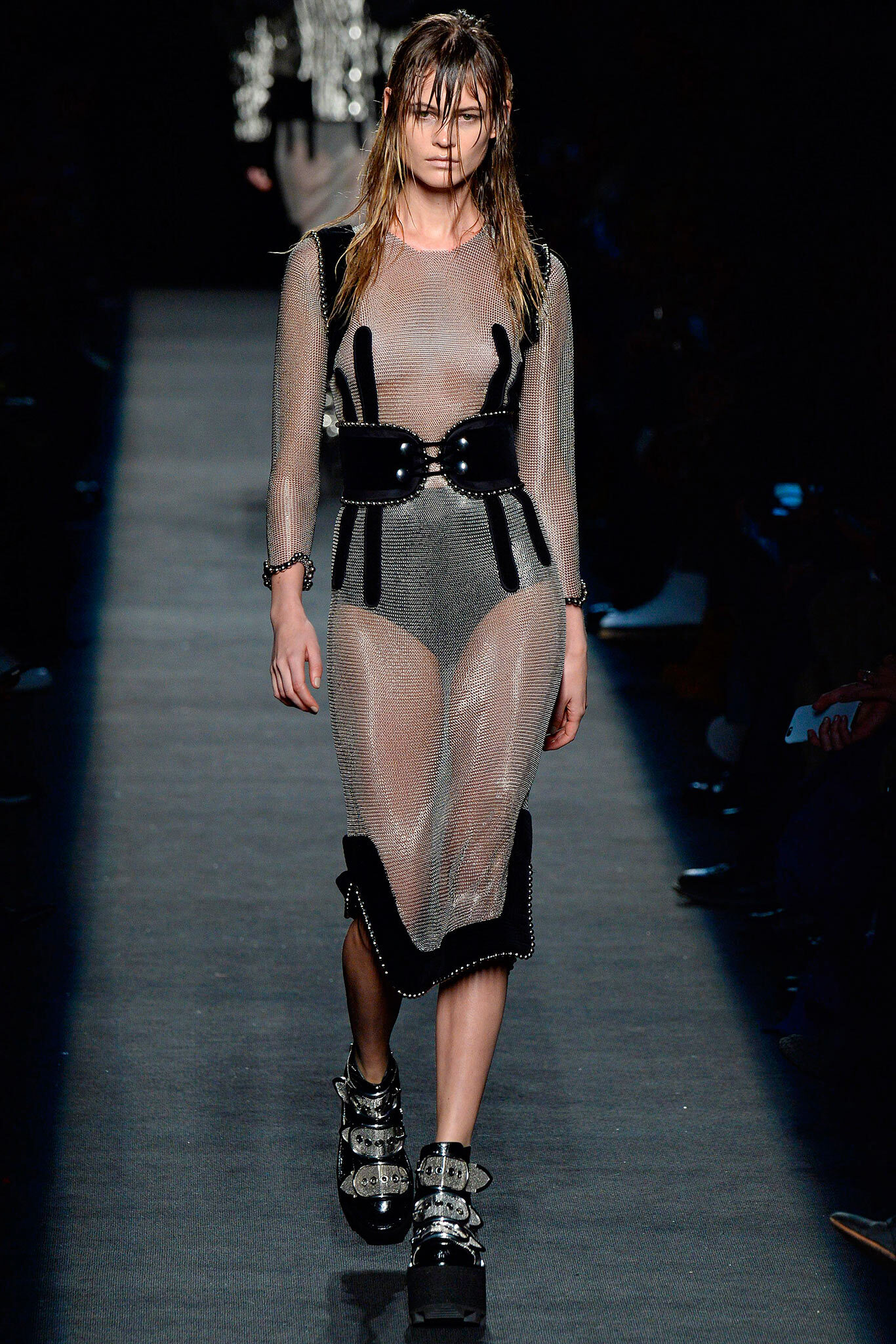 Imagine Wednesday Adams all grown up, minus the pig tails and you have this seasons Wang women. Fierce, Fetishy and Finesse.