Acclaimed fashion is practically taken over by Milan, London, Paris, and New York, so it’s obvious why we don’t hear much from the other cities. But, with Poland mostly known for its food over fashion, something needs to change for the world to recognise the diverse talent that’s currently being overlooked. There are many fashion designers in Poland, both old and new, who have the remarkable ability to create such exquisite designs. Their recognition throughout the world needs expanding profoundly, concluding in a future where heading over to their Fashion Week, which has only been up and running since 2011, doesn’t sound entirely unheard of.

One of the most well-known brands around Poland is Bohoboco. It’s a “contemporary fashion concept” that was created by two male designers: Michał Gilbert Lach and Kamil Owczarek. We first heard of them in November 2009, when their textiles studio opened, which enabled them to make their designs and create their clothes on mass and in a suitable environment. The brand then then came into the public eye in October 2010, at the grand opening of their first boutique in Gdynia, at the Klif modern shopping centre, which started off their expansion. They soon upped their status, gaining more and more customers, which allowed them to take part in all three fashion weeks in Poland from 2011-2012. Their AW11 fashion show collection consisted of many designs that featured either a tight buckle closing, a skinny belt, or a robe tie, therefore showing off the models tiny waists. Their SS12 collection, put together by Marcin Kempskim, was much more slick and contemporary with short black dresses contrasting with the pale dinner jackets with openings at the back, and their AW12 collection was classy full coats vs. detailed black shimmering jumpers and skirts. Following on from this success of parading their designs, in October 2012, they opened another boutique in another shopping centre ‘Stary Browar’, in Poznan. They’re continuing to grow: two more boutiques in fashion malls, an online store and new and inspiring collections each season, and we will be most definitely glad to see them around a whole lot more. 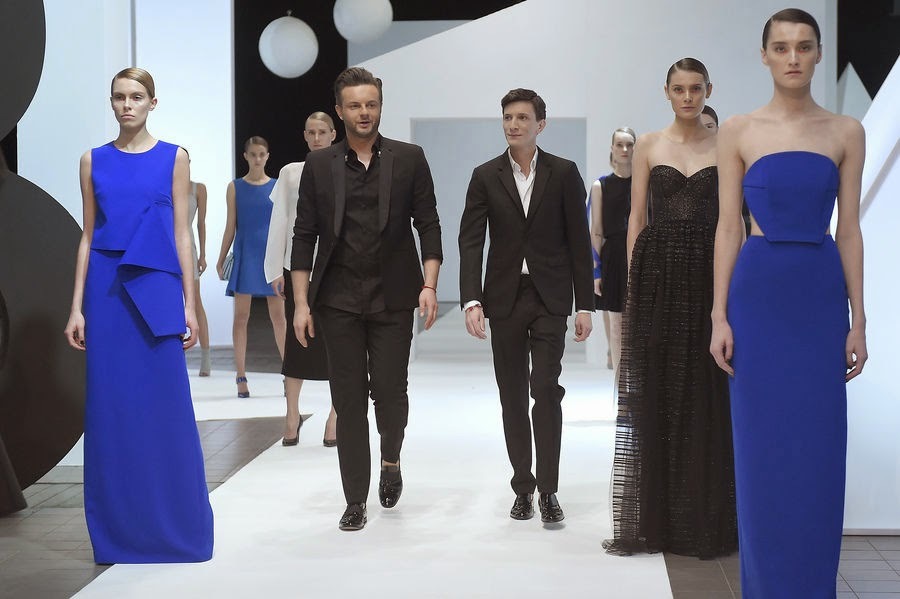 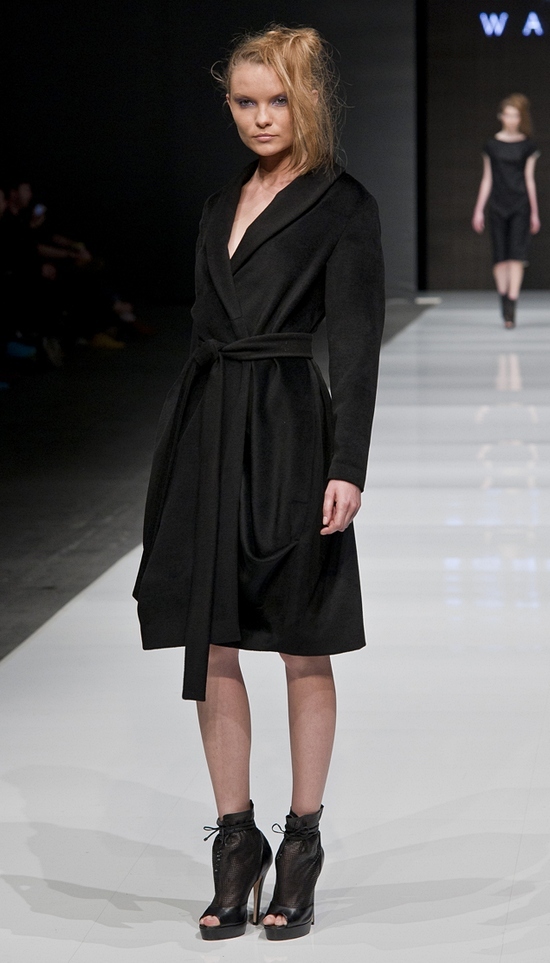 Another Polish designer, Gosia Baczynska, has come very far in her journey to parade off her brand, which is respectively named after herself. She was able to show off her AW15 collection at the Paris Fashion Week Show; an absolute roaring success, which the Mess Magazine team were fortunate enough to witness. Although she is known for her exquisite clothing inspiring around the world, she has an even more inspiring story herself. In 1989, there was the symbolic end of communism in Poland and the rest of central Europe, therefore the year of freedom. Baczynska, also known as the “fashion tsarina”, is included within those people who arrived in the sad, dark and gloomy place at this time in Poland’s history, and made something of herself. Now, twenty years later, it’s “Gosia Baczynska who creates history”: the faith behind the fashion we love. In 1997, she created her company with no background knowledge of business, or any experience in making it in a business alone, but she pursued her talent and gained further interest amongst buyers, investors and clients. The most magical aspect of the whole brand is that she doesn’t draw out what she wants, but she works straight onto the lavish materials, creating her designs from scratch there and then. She is also very personal with her work, and decides when or where it should be shown or who is fortunate enough to wear it: the AW15 fashion show was a privilege to watch, as she doesn’t show off her collection until it is absolutely ready for the public eye, “Nothing is ever enough for me. I always think about what is wrong, what needs to reach perfection. I have fifteen years of experience, but I am always scared not to be good enough.” Her designs have ranged from ethnic to futuristic, and the most recent AW15 collection had an electric feel to it: spider web styled black dresses with netting detail, and plenty of shimmering reflective mesh material giving the jumpers, dresses and flowing skirts a silver tone to them. 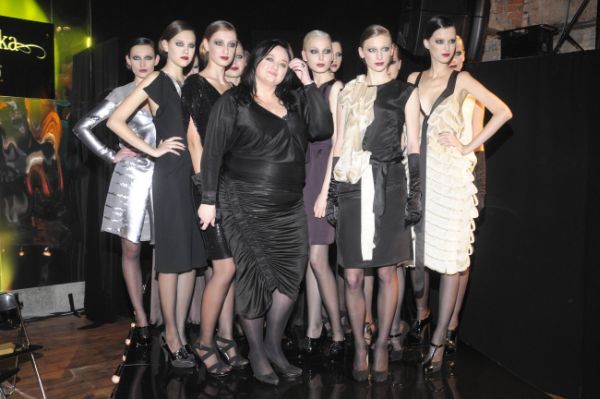 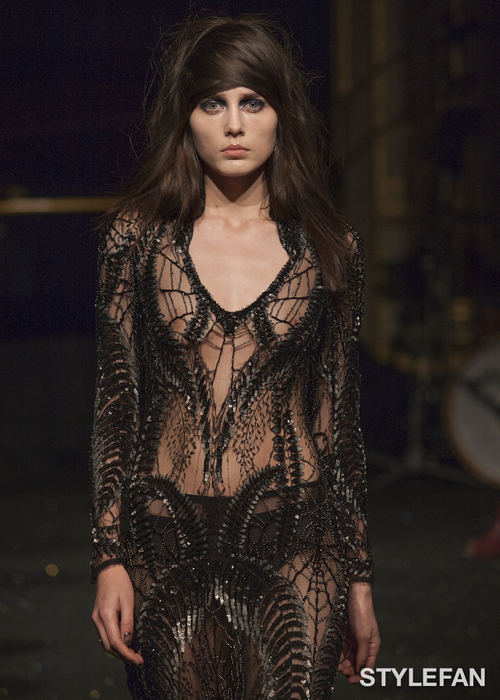 Lukasz Jemiol is one of Poland’s top male designers, who is now well known for his clever designs that radiate purity throughout his store in Warsaw. People will often go there just to see his collection, with its peaceful shades of grey, cream, beige and white, hang elegantly from the white brick walls. They will be able to note the exceptionally tailored, high quality, fabrics which all come together to complete the vastly admired and applauded range. But, Jemiol will then introduce the unusual aspect of sequins, vivacious colours, and metallic embellishments to a few of his humble designs, which spices up the overall feel to the collection as well as the ambience of his shop. His most recent ‘Fashion is Basic’ line consists of neutral tones of grey, white and black for the jeans and jumpers, which promotes stylish comfort. However, these were then contrasted against the sharp electric blue of a perfectly placed cardigan, jacket or scarf, which was both intriguing yet entirely captivating to look at. His SS14 collection persuaded us that red is just as easy to wear as black or white, with his flawlessly matched designs easily incorporating the strong and difficult colour. His collections allow us to see how able he is at effortlessly using a huge range of tones and textures, which is always pulled off and thankfully works to our, and most definitely his, delight. 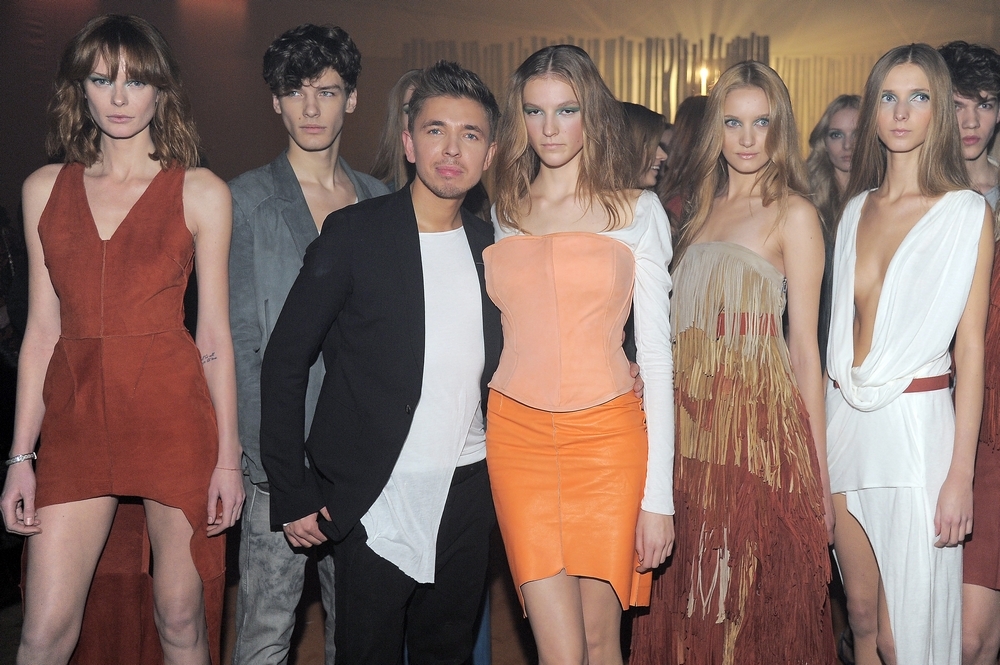 Designers MMC studio are another brand who have been affected by the challenge of polish fashion, yet come out on top. The duo met at the Academy of Fine Arts, where they then came up with the idea of MMC and pursued it: starting off the brand as a design studio, by dealing with orders for more popular and established Polish brands. Due to being slightly stuck, with designing collections for these prestigious brands, meant that they couldn’t fully express their individual talents and ideas, however it also guaranteed security within the fashion business which unfortunately made it difficult to move on. Then, they took part in many competitions to show off their collections, such as ‘Designer of the Year’ and ‘Smirnoff’, of which helped to expand their cliental, which is when they bravely released the first signature collection under the official name of ‘MMC’. Their basic philosophy behind the brand is to dress ordinary women, not just celebrities, in modern, low-key, minimalistic comfort, yet still extremely stylish. They intend to draw women in with their high quality fabrics and simple designs, instead of with the idea of patterns and bold colours catching their eye, and the AW14/15 collection consisted of just this: low key designs in basic colours, yet entirely sophisticated and chic. 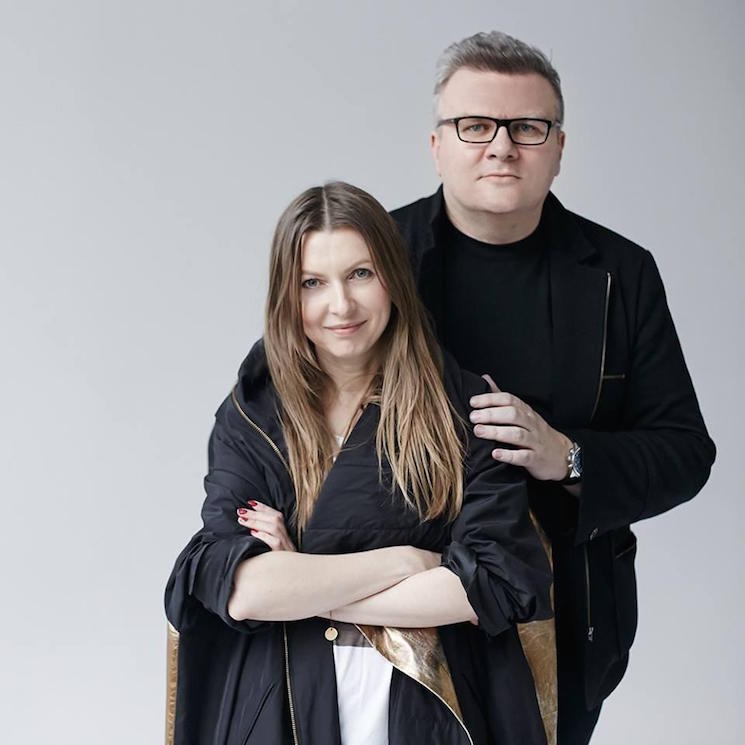 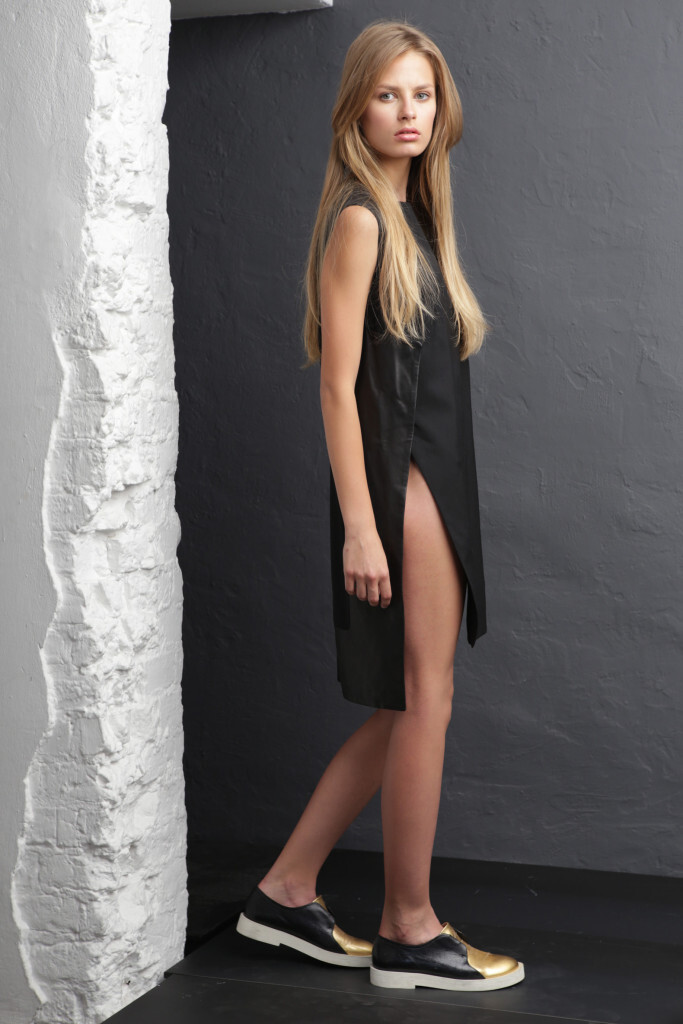 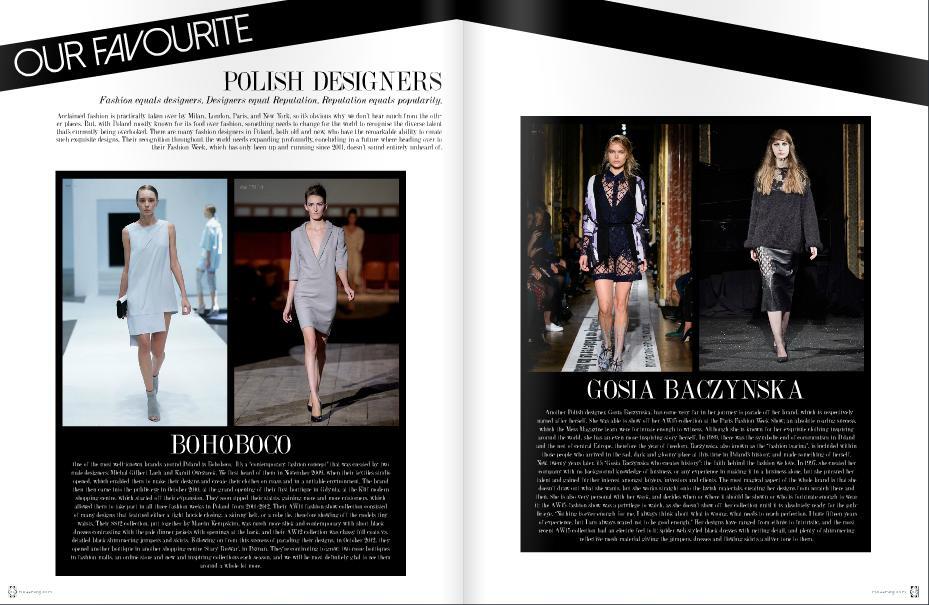 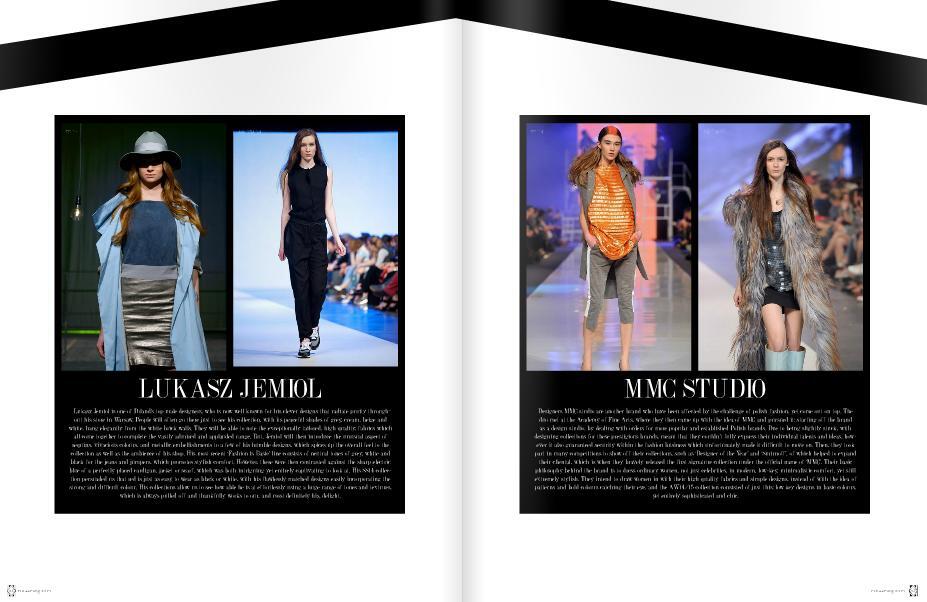