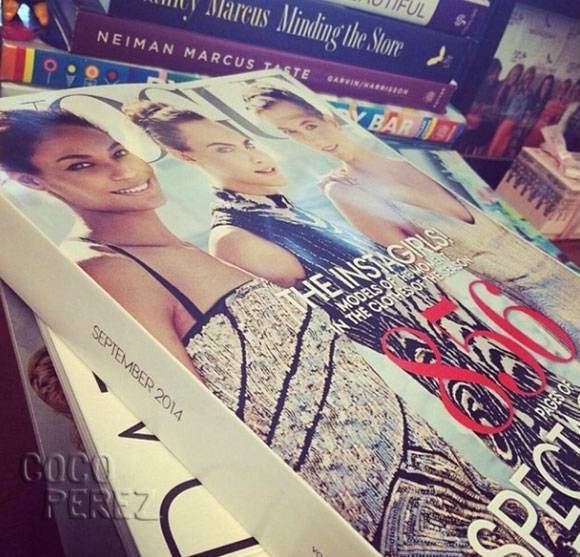 It is well known that the September issues for all American fashion magazines all make a big play to feature the world’s most famous celebrities. This in turn will help each brand sell the most copies.  The most anticipated of them all is Vogue, which almost always scores someone pretty major and this year they have gone above and beyond!  The just revealed cover stars are not your hot commodity celebrities. They are ALL models!

In another social media themed cover Joan Smalls, Cara Delevingne and Karlie Kloss are touted as “The Instagirls,” referring to their millions of followers. Delevingne is also the cover girl for Vogue UK’s September issue, making this the “It” Brit take over.

This isn’t the first time Vogue has put three models on a September over: Exactly ten years ago, Daria Werbowy, Natalia Vodianova and Gisele Bundchen were featured on the September 2004 issue, which included a fold-out that featured even more of our favourite models, like Gemma Ward and Karen Elson.

Here’s hoping that this issue has the same. (Also of note: Last week Vogue published a piece online about model Instagram #TBTs including Cara Delevingne, Gigi Hadid, Emily DiDonato, Lindsay Ellingson, Doutzen Kroes, Kendall Jenner, Georgia May Jagger, Andreea Diaconu, Kelley Mittendorf and Constance Jablonski. Is this a clue to who could be on the cover pull out?)