It’s been announced this week, that the well-respected British brand, is not only just sticking to fashion on the catwalk, it’s own virtual world, and fragrance and makeup lines, but is also now tapping into the beauty industry even further. Due 2015, Burberry will be releasing a skincare range. John Smith, Burberry’s Chief Operating Officer has said for it to be ‘big plans’ for the brand, due to the rise of beauty in the market, with £26 billion of the £60 billion sector being just around skincare. With Burberry’s loyal consumers, the question is, will they stand behind this new addition to the brand?

Since being announced, the launch of this new addition has already begun, with the brand currently on the watch for experts, with the hopes to become one of the top 10 luxury skincare products in the industry. With the skincare industry growing, John Smith has put this idea “it’s a prize worth pursuing,” and hopefully becoming as big as the famous trench coat. 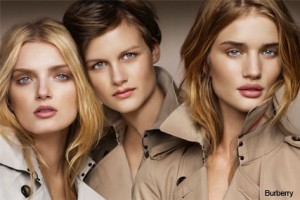