In case you already haven’t heard Iggy Azalea has officially made it to the top, she made history by being the only other act to join The Beetles by scoring both the number one and number two spots on the Billboard Hot 100, with her track Fancy at number 1 and Problem featuring Iggy at number 2. Iggy Azalea first gained recognition after her music videos for the controversial songs Pu$$y and Two Times went viral after uploading in onto YouTube which helped launch her career. But it hasn’t been all fame and fortune, Iggy Azalea was born as Amethyst Amelia Kelly and at the the age of 16 she moved to Miami from her home in Australia to pursue her dreams. In order to make her dream come true Iggy dropped out of school and worked three domestic jobs with her mother to ensure that she  had enough money saved to pursue her desire of moving to America. Like any other rapper Iggy grew up listening to rappers such as 2PAC, Missy Elliott and Busta Rhymes around this time of her life she also happened to build an online friendship with another teenager from the Bahamas called Derek. When the time came for her to move to America Iggy told her parents that she was going on a trip with her friend but instead she decided to stay and move in with Derek. After moving to Miami Iggy settled in Atlanta for a few years then eventually moved to Los Angeles after being encouraged by friend who happened to be from Interscope records. Due to the fact the Iggy grew listening to American rap and lived in the South for a long period of time she raps in a southern accent despite a strong Australian accent when she speaks. Iggy Azalea’s stage name came from her childhood pet dog called Iggy and Azalea is the name of the road where her family currently live. Before the process of making her new album started Iggy signed to Interscope records but then decided to stay independently signed to the Grand Hustle Label founded by rapper T.I. As well as being a successful rapper Iggy Azalea has also had other ventures such as modelling, in 2012 she was signed to Wilhelmina modelling agency where she then became the face of the Levi’s go forth campaign. Iggy also appeared in the House of Holland eyewear collection campaign, this year MTV realved that Iggy would be the host of MTV show House of Style. 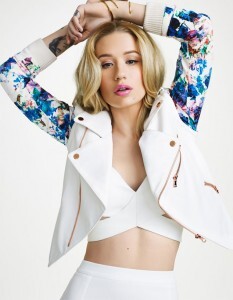 Iggy Azalea is currently on tour promoting her new album ‘The New Classic’.