Taste is a sharpened eye for the beautiful, the interesting, and the unusual – coupled with the talent to apply all of these to one’s life.

Last week the CFDA, a non-for profit trade association committed to establishing and supporting talent within the fashion industry, celebrated those who have excelled in fashion design over the past. The creators whose innovative ideas continue to inspire and drive the industry forward.

Eleanor Lambert founded the CFDA – Council of Fashion Designers of America, in 1962. The purpose of the council is to ‘Strengthen the influence and success of American Fashion Designers in the global economy.’ When I read about Lambert, I see words like destiny, strength and legacy. An individual whose expertise in the art world goes back as far as the 1920s, Lambert is recognised for putting American fashion on the map and changing the way in which the world views fashion. But her legacy extends beyond the CFDA. It is her creative journey that led her to create the legacy that we still celebrate today. During the 1930’s Lambert was involved in the opening and was the Press director of the Whitney Museum of American Art. She also was also involved in the founding of the Museum of Modern Art. This led her to take on the role as Press Director of the American fashion industry’s first promotional organization, the New York Dress institute, where she was able to organise the semi-annual Fashion Press Week in New York and Europe. Over many years Lambert helped initiate the idea that fashion could be used to raise a social awareness of the industry and to strengthen its values. This is what led Eleanor Lambert to establish the CFDA; to recognise the contribution that every individual in this industry makes to build a stronger legacy. 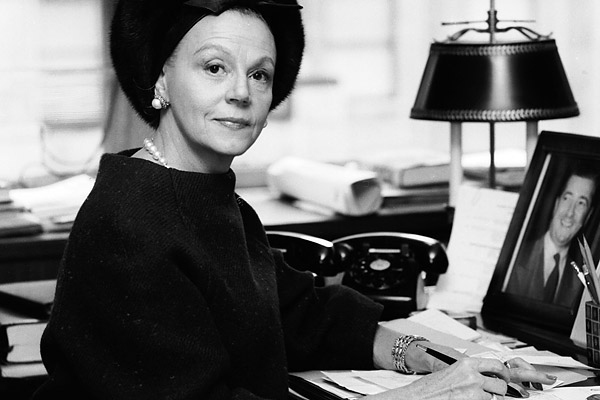 It’s been 53 years since and the awards are still going strong. 2015 has been a bigger year in fashion, designers taking more risks, taking on bigger challenges and using innovative technologies to expand their market. The three main categories I want to look at are: Womenswear Designer of the Year, The Media Award in Honour of Eugenia Sheppard and The Founder’s Award in Honour of Eleanor Lambert.

Womenswear designer of the year was awarded to Mary-Kate and Ashley Olsen, known to the fashion world as The Row. The pair has previously been awarded the title in 2012, but I feel that being honoured once more couldn’t have come at a better time for the brand. The brand has existed for nearly ten years now, with its purpose to reflect a sense of easiness and timeless elegance, whilst focusing on fine fabrics and the perfect fit. Its style is built on the foundations of luxurious minimalism, without being boring. But more importantly, what love is that this duo has pushed through the legacy that has followed them. No longer do we see them as Michelle Tanner, but as a dominating fashion label.

The evening saw the Media Award presented to Instagram’s CEO and co founder, Kevin Systrom. This is the first time ever that an app has been awarded the honour, which poses the question of how important it is to the fashion industry. Instagram allows the user total control of how to express their creative thought process by allowing the individual to explore different sources of imagery and share it with the world. It also allows people to reach a global platform that had never been seen before.

Lastly, the founder’s award was given to Millard “Mickey” Drexler, Chief Executive Officer and Chairman of the Board of J.Crew Group, Inc. It is Drexler’s ability to pick market trends and patterns, compare it to data to back up his observations and then bring those trends to the consumer that makes J.Crew one of the most compelling success stories of the past 10 years. The qualities of Lambert that Drexler builds upon is his innovative intuition, which helps him and his team work towards that next big thing. But what also sets aside Drexler from the rest is his use of data to create an idea and his aptitude for connecting the dots. In the fashion industry we hear a lot about the creative side and path that fashion leaders take to get results. But Drexler is using technology to not make calculated guesses, but to take a new approach to something old.

These awards are a great opportunity to not only celebrate but to learn from the greatest. It’s a time where the best of the best can come together to unite in their passion for style, quality and the future.

I would like to applaud not only the winners, but also the nominees whose contribution should not be forgotten and to the followers, because they are the people whose hunger for more pushes the creative individual’s to take one step further.