Cast out alone onto the isolated streets of South America desperately pining to become a part of the Chola Gang of Girls – who were individually strutting their stuff, with plenty of attitude, down the dusty sidewalk – was how everyone felt whilst watching the Givenchy AW15 Show at Paris Fashion Week. However, these Chola Girls weren’t dressed in the typical high-waisted beige trousers, tight tops, and flannel shirts, instead they were clad in Victorian style attires of rich materials with eccentric detail. Contrasting to the elegance of designer Riccardo Tisci’s designs, there was the captivating facial jewellery on each model; bringing to mind the specific Chola look, whilst at the same time persuading us that we were extravagant characters in a Jane Austen novel.

Tisci has recalled that he was intrigued by these Latin American street gangs, ‘Chola,’who classify themselves into a group where fierce facial piercings, thin-highly-pencilled eyebrows and hair slicked into baby curls around the face, is what you would be expected to just get used to. On the complete other end of the spectrum, Tisci is obsessed with Victoriana (Victorian evocative designs) and was always afraid to use it in his collections. So, finally inspired to experiment with his ideas, he created this intergenerational time warp and made it into a perfect reality; in which everyone at his show was privileged enough to witness just how wonderfully he pulled it off. And, named by Vogue: ‘“Chola Victorian,”’ who Tisci called the ‘“boss of the gang,”’ it evidently caught on.

It was a loud breath-taking line-up, in which Tisci filled with cleverly cut, expertly tailored and eccentrically designed beautiful clothing. His Victorian Gangster girls; the two polar opposites remarkably fitting together, wore lavish dresses and skirts in contrasting textures of velvet, chiffon, and silk, with fine mesh detail and cleverly sewed in ruffles at the seams. Although the collection was predominately black, a silken dress that entailed a peacock feather pattern clearly brought out the wild side of the collection; by introducing some bold and brash colours onto the catwalk. An opulent raccoon fur collar added an element of gothic sophistication to a black trouser suit, with a nipped-waist tailcoat, which most definitely increased the allure of dressing to the nines. The most Victorian-like design of them all, was a beautiful cream velvet dress which had adopted a fair yellow tinge to it. Adding to the superiority and contrasting with the girl gang facial features, was a staple cropped fur jacket: left open to show off Tisci’s magnificent detail and tailoring. The dress involved carefully crafted sheer chiffon ruffling from the waist upwards and running up onto the models left shoulder, bringing to mind an overgrown rose vine; beautiful yet uncontrollable. Tisci also included the classic gangster bomber jacket into his collection, but put his own wacky twist on it by creating it out of fur with an extravagant fringe detailing. The shoes that Tisci designed were chunky heels in a defiant velvet or leather, which kept within the distinct boundaries of the two themes.

Although his clothing designs on the models were striking and fascinating, there was a slight indication that the incredible facial jewellery could take this away and steal the show with its extreme pull; the jewels of “runway magic” presented us with a charmed fantasy full of arresting jet, silver and aquamarine. Adorned upon the models were these perfectly placed exotic crystals and diamonds, which shone out and caught our attention. With obsidian draped from their earlobes, long-gone teardrops made of pearls and rubies, and septum’s laden with miniature emerald chandeliers, it was extremely obvious that Tisci had got his inspiration from these ‘Chola Gangs’ and gone wild with it. He is well known for catching his audience’s eye, and he definitely did just that- and more.

While Tisci has been highly commended for his clever combination of two diverse styles, there has been a lot of controversy towards it: his show has been critiqued for suggesting inappropriate cultural references towards these gangs. “Chola” originates from the Aztecan word for “mutt” and was first used to describe Mexican immigrants in a rude and insulting way. In the 1960’s, Gangs soon claimed it as their own, and it was passed on to describe Mexican-American gang women who dressed or looked a certain way (gelled hair, flannel shirts, beige trousers and dramatic dark makeup). The fact that this word is continued to be used seems to be entirely derogatory in its own way- to those who are not used to gang culture- but it is what it is and is not an offence to them. However, Tisci has been criticised for taking it a step too far, and whilst innocently taking inspiration from these “Chola gang girls,” he cast all of his models in what was, predominantly, a racist way. Although he may not have done this with any bad intentions in mind, the whole show was full of white models acting as these “ghetto” girls, and according to Refinery29 it sent the message: “Even though it is hopefully inadvertent, is that baby hairs can look ‘chic’ on white girls, but are still ‘hood’ on Latina and Black girls.”

Though there is a brewing storm on this sensitive topic, the big issue here is not necessarily the fact that the “Chola” image was portrayed at the show, but the fact that this image will be a new trend that is entirely taken out of its already ‘flawed’ context. And, this trend will all be due to Givenchy having such a huge influence over the fashion world: Refinery29 continued by writing that “we will see this exact look — face jewels, baby hairs, and all — replicated countless times in advertising campaigns and photo shoots,” proving how easily cultural identities can be lost on upcoming fashion, fame, and fortune. As women, we use fashion and beauty as a way of expressing ourselves, therefore putting our vulnerability on the line. But, when this expression of self-belief is made by women who are not necessarily accepted into the world due to the colour of their skin, and then are not included in the industry of their exploitation, it is not fair for them to become a simple ‘trend’ that will come and go.

Regardless of the huge dispute over his collection, Tisci most certainly gave us a magnificent performance of which will, no doubt, be a hard to top. But, we hope that he, and all the other designers out there, will learn from the troubles that this racial inappropriate show caused, and either: think twice before they include this type of controversy in their new collection, or do so with the original trendsetters or their racial doubles. 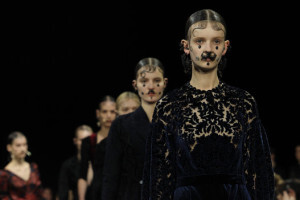 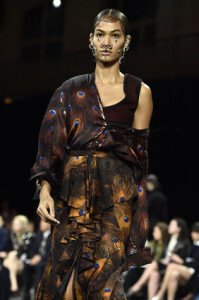 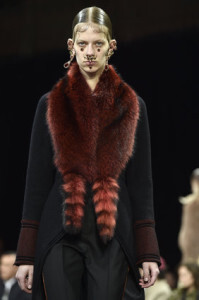 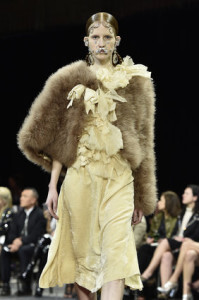 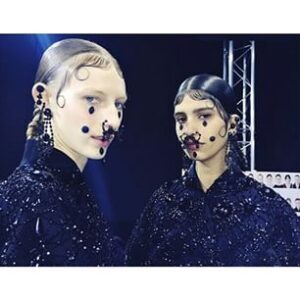