If I told you to think off a single music artist who is particular about the way she dresses who would come to mind?

Still not sure yet? I am talking about lady gaga! She doesn’t like to conform or be just another individual in a crowd of people. She likes to own it, wherever she goes there is a spotlight not only because of her talent but also because of her taste in fashion!

Let’s go back and reminisce and take a look at her outfit choices!

Lets talk about the unforgettable meat dress that she wore to the video music awards. Personally, I cannot forget this as I was young at the time and till this day I know the outbreak it caused worldwide.

The dress expresses that although every girl’s dream is to be beautiful and pretty, Gaga took a new approach. The idea that being pretty is not what matters, but for people to love her for who she is, and for the art she creates. She doesn’t allow her sexuality or appearance to get in the way of her talent.

Here are other examples of her outfit choices! 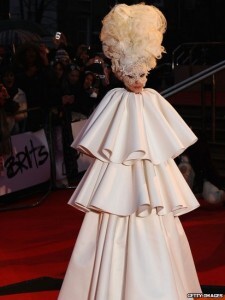 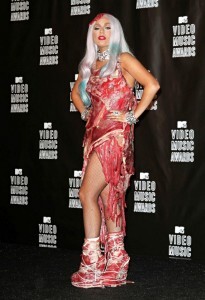 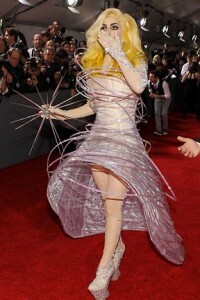 Although, in 2013 her wardrobe and her fashion weren’t much talked off, but her body said it all. She has done several nude shots for V magazine with the avant-garde artist Marina Abramovic. it was all to connect the art world to music, fashion and technology.

So you can understand the outfits that cause major outbreak?

Tunick said Gaga’s involvement would “bring a new perception or an experience of the avant garde to a mass audience”: “Any artistic intervention into the masses will only move societies in borderline conservative countries to have more acceptance towards human rights issues, women’s rights and artistic freedom. Art cannot change the world within a bubble. It takes artists like Warhol, Koons and Abramovic to make strong waves of change in conservative societies.”( quoted from The Observer by Vanessa Thorpe)

Read the full article using the link below:

All to get the freedom to express individuality and true self was her main motivation but Gaga didn’t just achieve that through her music but also through her fashion, art and by being who she desired to be.

A lesson to be learnt for all of us.